In one of Adrian Plass's brilliant satirical books (I think it's The Theatrical Tapes of Leonard Thynn - if you're a churchy type with a penchant for amdram it's a MUST READ), there's an account of how the Church Treasurer stamps his authority on every flamboyant idea with his cry of 'cheap! cheap! it must be cheap!', with Adrian replying, 'Oh do shut up Richard, you're beginning to sound like a chicken.' This ridiculously silly sense of humour appeals to me and usually makes me giggle when standing in the supermarket aisle, faced with the choice between organic (pricey but moral) and standard (cheap but immoral) chicken.

I think the poor boy stacking the shelves at Sainsburys yesterday probably needed counselling after watching a woman looking intently at various poultry products, shoulders gently shaking and various snorting noises emerging from her direction. Ok, so maybe I'm the one with the problem... but after consulting my worried-looking wallet and the veg already in the fridge, here's what we cooked in George's little kitchen last night.

Spanish chicken with peppers and butterbeans 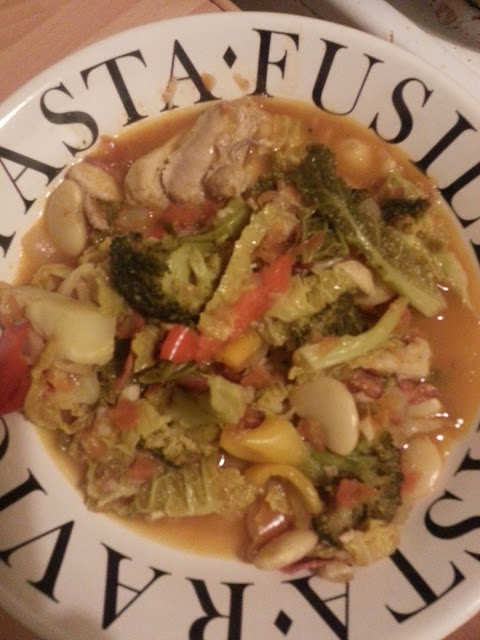 I always worry when attributing a name of a country to a dish, but as this contains chorizo, peppers and a lot of pimenton, I'm hoping I'm not too far off the mark. There's no chili in this recipe because I used my own homemade chili oil (see this blog for the story) but I think it works with a bit of a bite, so add one finely chopped chili if using normal olive oil.

1. In a nice big saucepan fry up two medium-sized chopped onions, four crushed cloves of garlic and some chopped chorizo in a generous glug of chili oil.
2. Add two sliced peppers - I used a red and a yellow, with a heaped teaspoon of sweet pimenton, half a tsp cumin seeds and lots of seasoning, and continue cooking for a couple of minutes.
3. Add six filleted chicken thighs. When they are browned and covered in the spices, throw in 8 chopped tomatoes and a can of butter beans. Season with a pinch of sugar - I prefer using fresh tomatoes so always add a bit of sugar - but you could use a tin of tomatoes instead.
4. Top up with some boiling water so that everything is covered, add in a bay leaf, cover and simmer for 30 minutes.
5. 5 minutes before serving, add some chopped greens and herbs - I used broccoli, savoy cabbage and parsley because it's what I had - and season to taste.

There's another version of this dish which I make if I have more time and people over, which uses bone-in chicken thighs, pre-roasted peppers and cooking in the oven rather than on the hob. This does give more flavour to the entire dish and feeds six people, so I would recommend doing that if you can - but it needs cooking for an hour and a half in the oven, and the greens served on the side.

However, this made a really tasty mid-week dinner for two people and a hungry giraffe with leftovers for lunch, which I've just scoffed at my desk. All I need now is a large glug of Pacharan to finish it off...